The opening quarter of 2018 has seen the commercial property market in Northern Ireland experiencing a slow start to the year, however, the forecast for the second quarter is stronger with an above-average £82.3m of deals currently under offer, according to our latest ITNI report.

The Investment Transactions Northern Ireland Q1 2018 Bulletin recorded a completed transaction volume of £11.9m which is 85 per cent below the five-year quarterly average.

Retail transactions continued to dominate, accounting for 88 per cent of activity in Q1. This included Meadowlane Shopping Centre in Magherafelt for £7m (NIY 9.80 per cent), Supervalu in Comber for £1.9m (NIY 6.76 per cent) and a three unit retail parade on the Upper Newtownards Road for £1.4m (NIY 6.45 per cent).

As a consequence of the nature and volume of investment opportunities, local private investors were the most active investor type, responsible for seven of the eight Q1 deals. Other investor types were quiet, and the only deal of note was Starwood Capital Group’s purchase of the 198-room Hilton Hotel at Lanyon Place as part of a £135m seven hotel portfolio in February.

Neil McShane, director of capital markets at Lambert Smith Hampton, said: “After the slow start to 2018, the Northern Irish commercial property market is set for significantly increased activity in Q2 with £82m of deals expected to complete.

“The alternatives sector accounts for over a third of the Q2 forecasted volume, surpassing current expectations for the core sectors of retail, office and industrial. Anticipated alternative transactions in Q2 include leisure facilities and car parks.”

He added: “With the UK/EU trade negotiations scheduled to begin this month and the October 2018 target date for agreement on the withdrawal treaty, further clarity on the future relationship between the UK and the EU will be forthcoming during this year. Progress on the Brexit negotiations, and a better understanding of the implications of Brexit, bodes well for the Northern Irish investment market in the medium to long-term, as removing a degree of uncertainty is expected to enhance supply and help to relieve investor frustrations.” 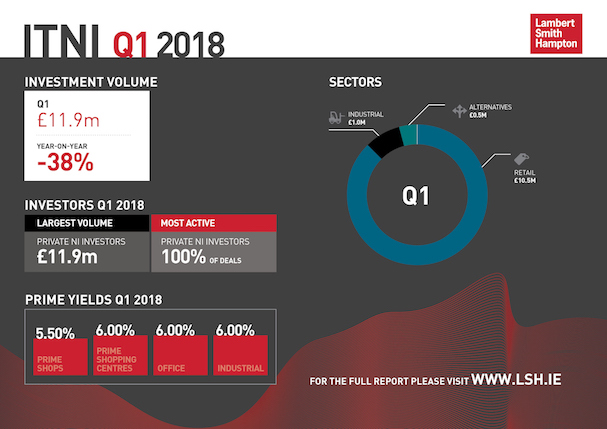