Following the BBC’s decision to relocate to Media City in Salford Quays, we advised them on the disposal of their Oxford Road, Manchester HQ facility.

We developed a mixed-use masterplan with Manchester City Council and adjoining land owner Bruntwood to maximise the development potential of the site and secure best value for licence fee payers.

Commenting on the project, Peter Skelton, Development Director of LSH said: “We have provided advice on the BBC HQ site for over 10 years and managed the liaison and discussions with key stakeholders. To ensure the masterplan met the BBC’s aspirations, it had to be attractive to the market but also deliver high quality public realm and community benefits.”

LSH selected a two stage bidding process with parties in the first stage not expected to spend considerable sums of money on design and evaluation. The initial interest in the site was from a number of players with 8 formal bids being submitted.

LSH reviewed all first stage bids and sent Legal documentation to a final selection of four parties, who we invited to make final and conditional bids. Following due diligence, we recommended Realty Estates as the preferred bidder, and the BBC concluded a sale of the site in March 2011. 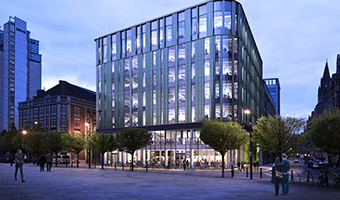 Facilitating the regeneration of a landmark site through a collaborative approach Our work We provided strategic due diligence and purchase advice covering retail and leisure, ...

Facilitating the regeneration of a landmark site through a collaborative approach Our work We provided strategic due diligence and purchase advice covering retail and leisure, ...
View all content