Are occupiers are tired of London

As the cost of living in London becomes ever more challenging, businesses in the capital are starting to fear its long-term impact on the supply of talent.

Alongside the political will to drive growth in the Northern Powerhouse, the evolution of ‘North-Shoring’ among major occupiers may itself play an important role in rebalancing the UK economy.

While London remains an undisputed global hub for talent and culture, the capital is facing acute and growing cost pressures, both for its resident population and businesses alike. These pressures partly reflect the unbalanced trajectory of the UK economy over recent decades; as London’s share of UK economic output has increased, the three regions which comprise the Northern Powerhouse have lost ground. 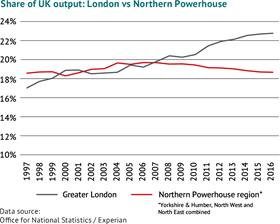 But is the capital becoming a victim of its own success?

In April 2016, London First reported that London’s housing crisis is a serious threat to its global competitiveness. It warned that, unless the issue is addressed, by 2040 only financial sector workers would be able to afford to rent a flat in inner London, choking off the supply of talent in an array of other key sectors.

However, this London-centric view overlooks the potential of the Northern Powerhouse in both helping the UK to compete on the world stage and rebalancing the UK economy. Crucially, the political will to tackle the imbalance is gathering momentum and, with sustained investment in transport infrastructure, the draw to occupiers to the region is only going to increase.

The case for relocation

Historically, the business case for ‘North-Shoring’ from London was centred around cutting costs. But forward thinking businesses are now also considering relocation for the sake of their existing and future staff. The Northern Powerhouse region has seen a number of high profile inward investment moves over the past few years, including Freshfields and Ford Credit in Manchester, and Sky’s Academy in Leeds to name but a few.

Alongside the private sector, the Government itself has an important role to play, as it seeks to rationalise the civil service estate and spread vital Whitehall functions into the UK’s other core cities. In its first wave of ‘hubs’, the Government Property Unit (GPU) is seeking to find space in the Northern Powerhouse cities of Manchester, Leeds and Liverpool totalling 1.8m sq ft. This is in addition to the 77,800 sq ft the Department for Work and Pensions is understood to be on the verge of taking at Two St Peter's Square in Manchester.

Office space in Central London has always commanded a premium over elsewhere, although this has become more substantial on the back of strong rental growth in recent years.

The cost differential is set to widen further from April 2017 when the next business rates revaluation takes effect. Its impact will be felt most acutely within London’s emerging districts, where a steep rise in business rates liabilities is expected to add over 10% to total property costs.

Significant as property costs are to a business, as a general rule, staff costs in a brand new building typically account for around three quarters of a business’ expenditure. Considered overall, the total cost of a single office workstation (i.e. staff and property) in a brand new building within London’s Midtown costs £83,000 per annum, compared with £52,000 per annum in Leeds.

For a new-build office totalling 50,000 sq ft with 500 staff, the above equates to an annual cost of £25m in Leeds. Over a period of five years, the effective ‘saving’ from being located in Leeds as opposed to London’s Midtown amounts to almost £70m. 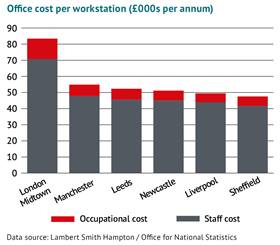 London-based office workers may command markedly higher salaries than their regional counterparts but, for the majority, this is more than offset by the eye-watering cost of housing, whether to purchase or rent.

The current average cost of a house in London’s inner boroughs stands at well over eight times the average combined salary of a cohabiting couple. In contrast, housing costs in Leeds, which are the ‘least affordable’ of the major cities in the Northern Powerhouse, stand at only four times combined salary.

The average couple also needs to save for eight years to afford a deposit in London, rising from 3.8 years in 2007. This is almost twice as long as it takes in most other parts of the UK. Owning a home outright in the capital is therefore becoming a distant prospect for many London professionals, including those on higher salaries. Many opt to commute, but this is expensive and time-consuming. 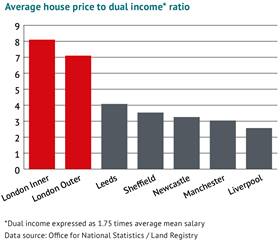 The importance of retaining talent

From a purely financial perspective, the case for relocating from London to the cities of the Northern Powerhouse is clear for both businesses and employees. But there are of course other important factors businesses will have to consider beyond cost, including availability and suitability of local talent, transport connectivity, the cultural fit of the organisation with the location and, of course, logistical risks to the business surrounding a move.

Moving forward, local policy makers, investors and developers have a key role to promote inward investment moves into the Northern Powerhouse. Development sites should be identified and considered to suit the needs of both existing occupiers and potential in-movers, alongside practical advice to identify the right solutions and mitigate the risk.

Ultimately, sustained inward investment in the region will depend on attracting and retaining a highly skilled workforce.

While the Northern Powerhouse is home to several renowned universities, a key challenge will be to retain its talented graduates and stem the ‘braindrain’ into London.

Ironically, as the cost barriers of London become more widely understood by the region’s ambitious young professionals, businesses may increasingly target them. 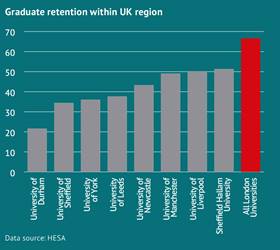