As expected, the lockdown drove volumes to a record low in Q2 and, while no sector was spared, those that remained operational were key to activity. 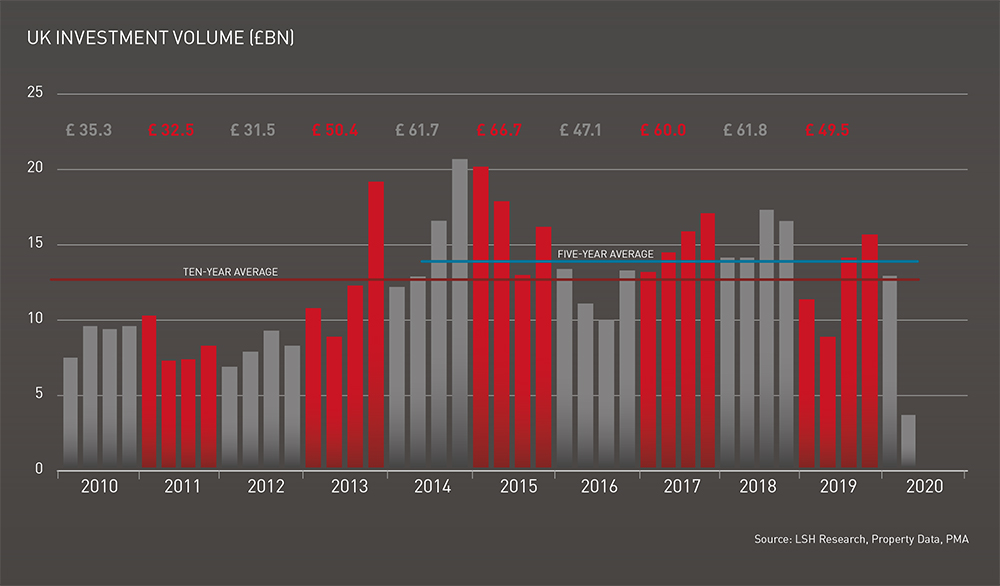 JUNE PICKS UP AMID RECORD LOW

Total UK investment volume slumped to £3.6bn in Q2, the lowest seen in the 20-year history of the UKIT analysis and 73% below the five-year quarterly average. The impact was especially acute at the larger end of the market, with the number of recorded deals in Q2 being 58% below average.

Positively, the easing of the lockdown went in tandem with a clear improvement later in the quarter, as many large deals that had been on hold were ultimately concluded. Volume in June reached £1.6bn, almost twice the level seen in May, while the number of deals increased by only 14%.

Tellingly, sectors that remained in operation throughout the lockdown were the most actively traded in Q2. At £831m, industrial accounted for a record 23% share of total Q2 volume, of which 85% was distribution warehousing.

Following a record low in Q1, the beleaguered retail sector endured its second lowest quarterly volume on record in Q2, with activity of only £637m. Notably, for the first quarter on record, Q2 was devoid of a single shopping centre transaction.

However, the vital role supermarkets played during lockdown was reflected in resilient activity, with a flurry of supermarket deals accounting for 68% of retail volume. The largest deals included Supermarket Income REIT’s £102m acquisition of a 25.5% stake in a Sainsbury’s portfolio and Waitrose’s £62m (NIY 4.30%) sale and leaseback agreement on five of its stores to LondonMetric.

Activity in the office sector was significantly disrupted by the lockdown, with many live deals being put on hold and some cancelled altogether. UK office volume in Q2 dived to a record low of £1.1bn, 78% below the five-year quarterly average.

Central London offices was hit hardest of all the sub-sectors, with record low volume of £595m equating to just a fifth of its average level and dominated by three large deals in the City to overseas buyers. Activity was equally thin elsewhere, with the sole major deal in the UK’s core regional cities being Tesco Pension Fund's £70m forward purchase of Halo, Bristol.

Despite having taken the leading share of volume in each of three previous quarters, volume across the living sectors (student accommodation, PRS, hotels and healthcare) slumped to £670m, the lowest since Q3 2002. Hotels fared worst of all, Q2 volume 93% below its average, while the largest deal across the living arena was a Far Eastern investor’s £90m purchase of two luxury student accommodation residences.

High levels of uncertainty engendered by the lockdown drove a clear flight to quality in Q2. While many of Q2’s transactions were subject to price renegotiation, the All Property average transaction yield shifted down by a considerable 49bps to 5.25%, its lowest level since the beginning of the global credit crisis in Q4 2007.

Reflecting the preponderance of supermarket deals, retail saw the largest inward movement this quarter, with yields contracting by 167 bps to 5.31%. Industrial yields moved out by 103 bps returning to the Q2 2015 level, while office yields shifted the least, moving out by a relatively modest 16 bps. 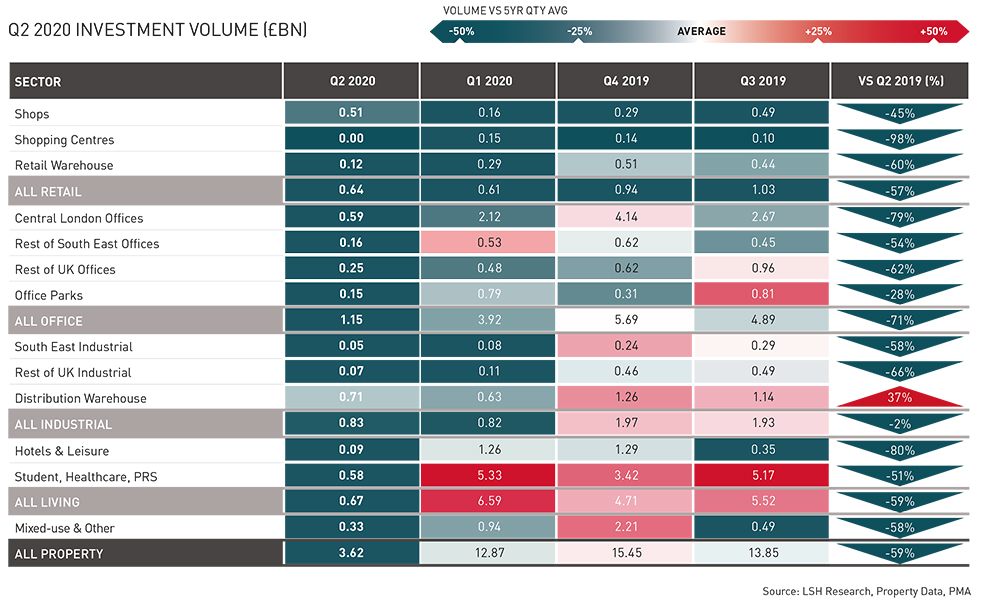 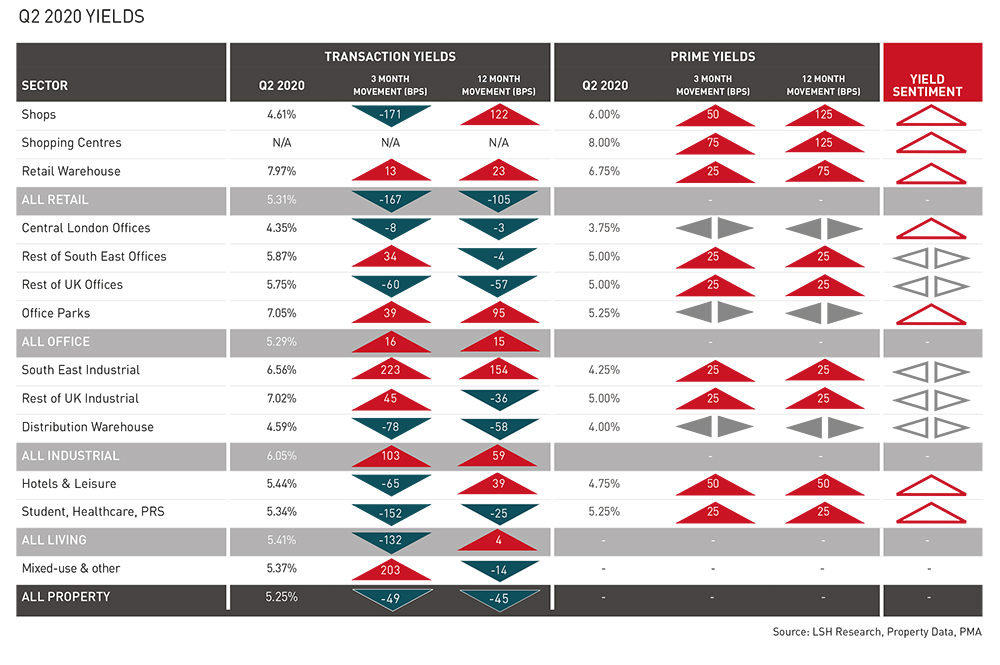